Immerse in an ECO-Tour and Experience Southwest Florida Islands by Boat
“Captain Brian Holaway is well versed in the intricacies of our unmatched locale. He can guide to and through a multitude of out-of-the way tidal creeks, bayous, keys and islands. More important is his passionate interest and respect for the region. With unique insights from his many explorations and his studies, not only does he identify the birds and wildlife that inhabit our semi-tropical watery land, but he explains their interconnectedness to their environment and each other. In addition, he shares the fascinating history of rugged people who came long before us: Florida Native Indians, the Calusa, the Spanish, the Cubans, early homesteaders, and the wisdom evident in the growth of their culture.

You will come away with great enjoyment and a new understanding of this beautiful place and its history.” 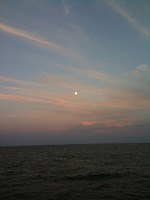 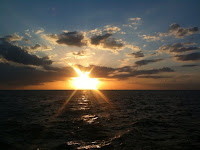 Thirty five and a half hours before the full moon, I went sailing. Van Morrison sang "Someone Like You" as the sun disappeared over the far horizon. I turned the boat toward the east as the moon silently appeared over the bow of the boat. The moon beams guided the way home but it was Van Morrison's voice that led the way.
Posted by Capt. Brian Holaway at 5:04 PM No comments: Links to this post

Capt. Brian Holaway
I have been a Shelling Guide to Cayo Costa State Park since 1995. Many people know me as the Shelling Guide and Captain with Captiva Cruises over the past 20 years. In 2016 I began solely offering private small boat charters to the islands of Pine Island Sound including Cayo Costa State Park, Cabbage Key, Useppa Island, Pine Island and North Captiva. I am a certified Florida Master Naturalist, licensed USCG Captain, avocational photographer, seashell enthusiast and passionate about the history, people and culture of Southwest Florida, especially Cayo Costa. I volunteer as a member of Friends of Cayo Costa State Park and have great respect for the heritage of Cayo Costa. My goal is to provide guests with an overall experience and appreciation for the waters, islands, shells, plants, marine life, wildlife, history and people of this unique area of Southwest Florida. 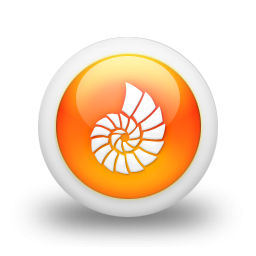